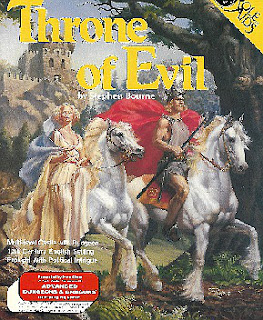 Throne of Evil, a 32 page adventure by Role Aids was published in 1984 and claimed to be "fraught with political intrigue, suspense, and magic in the violent world of 12th century." Fortunately, the 12th century aspect is superficial at best or else this would have been unusable for most ongoing campaigns.

Instead of being set in anything resembling 12th century England, this takes place in a generic setting with a few real world historical events awkwardly serving as the catalyst to this dungeon delving adventure.  Any pretense of this being 12th century England disappears as soon as you get to the six pre-generated characters on page seven. Only one the characters is human and he is a cleric of Balder!

Old School Credentials: Because it is an AD&D (1e) compatible product published in 1984, it's automatically "old school" to me. It has a very typical old school feel.

The Good: First and foremost, it's a solid dungeon craw with a few good illustrations that evoke the first edition zeitgeist. There are some standard monsters (Lizard Men, Piercers, Giant Spiders, etc.) as well as some odd new creatures (Hawk Men and Giant Kobolds) to spice things up. The plot and political intrigue, despite being based on real world events, is easily adaptable to almost any setting.  It's well organized and and an interesting read.

The Bad:There's not much really bad here. The dungeon might be a bit too generic and have too illogical of monster placement for some, but these aren't really that bad. That the module really isn't what it claims to be could by considered "bad" but it's hard to be upset when it turns out to more useful than it would have been.

The Odd: This product has some rather strange quirks that are more interesting than good or bad. Although it states "for use with Advanced Dungeons & Dragons (R)" on the cover, it uses different terms/abbreviations for many stats [IN (intuition) for wisdom, SM (stamina?) for constitution, HTK (hits to kill) for hit points, etc.]. It has an early use of THAC0, but features a simple formula to roll it using percentile dice. And as mentioned above, it is set in 12th century England, but is filled magic, monsters, and non-human heroes that apparently have had had absolutely no influence on the political and cultural history of the area.

Likely Use: Despite the setting, its a very standard adventure that could easily be played as part of a campaign in most fantasy settings. It was likely intended as a one-shot, non-campaign module and could easily be used that way as well.

Value: Another long out of print product, the price varies radically from $6 to $65 at current Amazon prices for good to very good condition with the very good being cheaper. Personally I would say it's a good value at $10 or less, including shipping, but at over $20 total, it's not worth it.

Overall: A good example of a typical third party effort in the 1980s. It's a decent adventure and worth a look.
Posted by Dave Tackett at 8:01 AM 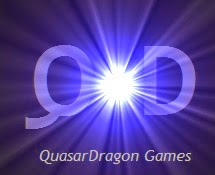